The Royal wedding is just over a week away, and while many people will be focusing on Meghan Markle’s dress or what the Queen will be wearing, we’re more interested in the cars the happy couple and the rest of the Royal family will be arriving in.

The Royals are famous for their love of cars dating back to at least the end of World War II when the Queen trained as a driver and mechanic in the Women’s Auxiliary Territorial Service.

Since then the Queen, Prince Phillip and their family have owned and driven some of the most expensive, most luxurious cars in the world.

For most of us, their current collection of state cars and personal vehicles is the stuff of dreams, so we hope you won’t get too envious while reading this article.

If you’ve ever wondered what the Queen’s favourite car is, what car Prince Charles received for his 21st birthday or just love super expensive and glamorous cars, you’ll enjoy this look the Royal family’s car collection. 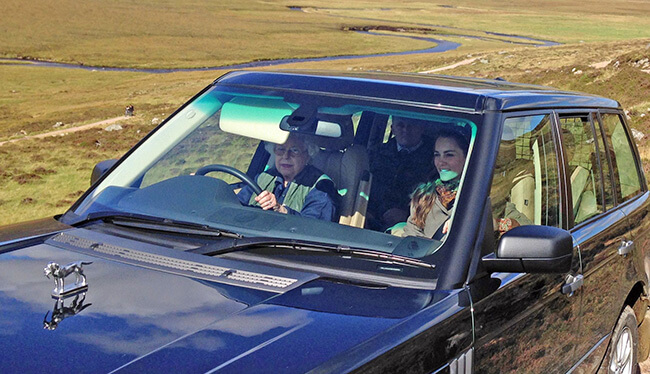 While strictly available to any serving head of state, the sheer length of the Queen’s reign means that she’s been lucky enough to be driven around in some the greatest British cars of the last 65 years.

Whenever she is on official state duty she has the choice of a range of ridiculously expensive vehicles including three Rolls-Royces, three Daimlers, and two Bentleys, and a number of Volkswagen support cars. Both Bentleys were specifically designed for Her Majesty and include hinged rear doors, so she can stand up straight before stepping out, armoured plating and a unique removable roof covering.

One of the Bentleys and her Rolls-Royce Phantom VI were actually gifts to celebrate different milestones in her reign.

Her Rolls-Royce limousine was a gift from the Society of Motor Manufacturers and Traders in recognition of 25 years on the throne. In 2002, she received a Bentley State Limousine from Bentley to celebrate her Golden Jubilee.

Besides the collection of state cars, the Queen also owns a range of other vehicles. She has famously said that her favourite car is the Land Rover Defender and according to Car Keys, Elizabeth II has owned 30 Defenders in her life. A fully customised, 2002 edition of the Defender with a 4.2-litre V8 engine that she personally received from Land Rover was sold at auction for around £30,240.

Another on the Queens seemingly endless list of exclusive, executive cars she has owned is the 2001 Jaguar Daimler V8 Super LWB. The car was her personal vehicle for three years and was used to drive around the Windsor Castle estate and visit friends.

The Jag had a number of modifications for Her Majesty’s comfort including armrest designed specifically for her own specific type of handbag as well as a unique switch which allows her to funnel the fresh air to the sides after telling the designers that she likes the fresh air while driving, but not directly on her face.

In 2017, Car Keys estimated her entire car collection to be worth an eye-watering £10million.

One of the most famous cars not driven by the Queen in the Royal family is the Aston Martin Volante DB6 which she bought for Prince Charles on his 21st birthday. Eco-friendly Charles made the car a bit kinder to the environment by converting the Aston Martin to run on bioethanol fuel made from wine. It’s reported that the car uses around four and a half bottles of wine per mile.

The DB6 was used in the recent Royal wedding of the Duke and Duchess of Cambridge, William and Kate. The pair were driven from Buckingham Palace in the car after their 2011 wedding.

The Prince of Wales’ love affair with Aston Martin is obviously well known as he received another automotive present made by Aston Martin. This time it was from the Emir of Bahrain, Sheikh Isa Bin Salman Al-Khalifa.

The personalised 1989 V8 Vantage lost some of its famous looks when the Prince asked for the makers to remove the boot spoiler and side-skirts, but he kept the powerful, high-powered engine though. He also added a manual gearbox and a British Racing Green body, choices that were so popular that Aston Martin boss Victor Gauntlett ordered one for himself in the exact same spec.

While British cars a staple of the elder Royals, the young blood, William, Kate and Harry all seem to prefer the German option. Audi is the specific brand of choice for the new, cool Royals with Harry opting for an S3, Kate the A3 and William the A5 Sportback which was supplied directly from Audi.

Of course, while on Royal duties, it’s British all the way with Prince William and Princess Kathrine being driven around in a stunning Bentley Continental Flying Spur.

The exact cars that Prince Harry and Meghan Markle will be arriving and leaving in are yet to be confirmed but many have speculated on which make and model the latest Royal to tie the knot will choose.

The current frontrunners are the obviously popular Bentley and Rolls-Royce with others predicting that former bad boy Harry could opt for a sportier model like an Aston Martin.

Whatever they choose, we’re pretty sure they’re in safe hands as the Royal family have a knack for choosing incredibly classy and beautiful cars to arrive at the church in.

Harry’s sister-in-law, Kate arrived at her wedding with her father, Michael in the Queen’s 1978 Rolls-Royce Phantom VI. At the same wedding, Harry, this time on best man duties arrived with Prince William in a 2002 Bentley State Limousine.

The wedding of Prince Charles and Lady Diana Spencer was a more traditional affair with Princess Diana opting for a classic horse-drawn carriage, an idea that Harry and Meghan will be replicating slightly when they travel around Windsor after they get married. It is believed the couple will use an Ascot Landau for the celebratory trip around Windsor unless we get a spring shower, in which case they use the Scottish State Coach – a gift to his great-grandmother Queen Mary in 1920.